The Perfect in German (Perfekt) 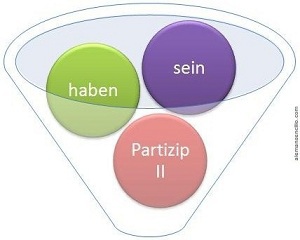 Use of the "Perfekt"

The "Perfekt" is the most used verb tense for referring to past actions in German. It is used for 3 situations:

To refer to a past action that continues in the present

If the action continues in the present, the use of the Perfekt is mandatory.

To give "Perfekt" this connotation of being in the future, it is necessary to add a temporal particle that indicates the future. This may seem a bit odd to you.

The conjugation of the "Perfekt" is easy enough. It is constructed with the verb "sein" or "haben" in the present indicative + "Partizip II" of the verb.

When to use the auxiliary verbs "haben" and "sein"

- "Sein" is only used as an auxiliary verb:

- The auxiliary verb "haben" is used in all other cases.

- There are some verbs that can be transitive or intransitive depending on the sentence which is why they will sometimes have sein or haben as auxiliary verbs. Examples that we have are:

How Partizip II is constructed

It depends on what type of verb you are dealing with:

Regular verbs without a prefix

An "-e-" between the stem and the final "-t" is added with some verbs (for more details, see the present indicative)

Regular verbs with a separable prefix

Many of the irregular verbs follow the construction:
ge - (VERB STEM) -(e)n

But, unfortunately, most irregular verbs do not follow any easy rule to learn:

This link has most of the irregular verbs' participles in German.

The passive voice of the Perfekt

The construction of the passive voice in the "Perfekt" consists of:

As a reminder: "Worden" is the Partizip II of the verb "werden" when it acts as an auxiliary verb.

If the sentence in the active voice in the "Perfekt" is:

He has read a book
Er hat ein Buch gelesen

The equivalent sentence in the passive voice would be:

The "Perfekt" with modal verbs

With modal verbs it is much more common to use the "Präteritum" than the "Perfekt" to indicate the past.