Adverbs are words that do not change (they are not declined) and they modify the verb’s meaning, an adjective or other adverb.

Temporal adverbs dealing with the day

The adverb gerade is used to make the present continuous in German:

Ich lese gerade die Zeitung
I am reading the newspaper

Other adverbs of frequency

Often, temporal adverbs of frequency are formed from nouns with an "–s" added on. At first, this construction creates a bit of confusion among students of German. 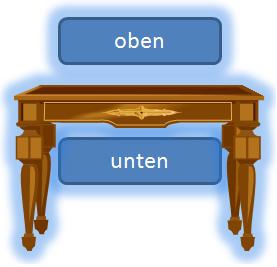 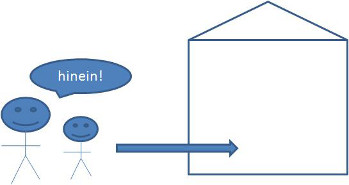 Here are some examples so that you understand better:

If my child and I are outside of the house and I want to tell him to go inside (for example, to do his chores), I’d say: 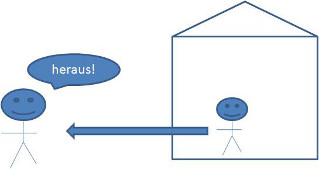 If I am outside of the house and my child is inside and I want him to come out (for example, to cut the grass), I’d say: 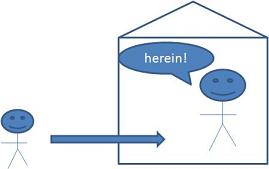 If I am inside the house and my son is playing in the garden and I want him to come in (for example, to eat), I’d say: 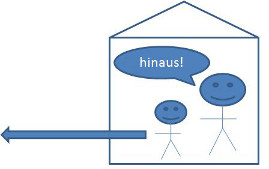 If my child and I are inside the house and I want to tell him to go out (for example, to play in the garden), I’d say:

Construction of locative adverbs by adding an -s

In German, locative adverbs are also formed by adding an "–s" to nouns.

Causal adverbs indicate the reason or origin of an action.

Causal adverbs serve as a connection between two sentences, given that they’re Konjunktionaladverbien

Ich möchte in Deutschland leben, deshalb lerne ich gerade Deutsch
I would like to live in Germany, therefore I am learning German

It must be emphasized that adverbs occupy a position and by placing them at the beginning of a sentence, they move the subject to the 3rd position.

The adverb "gern" is used often in German and it’s equivalent is "gladly".

The construction "Ich hätte gern…" is very common in German and means "I would like to" and is used to politely order something.

gern or gerne are exactly the same but gern is used more often.

Pronoun adverbs are the combination of a preposition and a pronoun and are used only to refer to things (not for living things).

The adverbs "da-" + preposition are used very often and their translation depends greatly on the context:

Ich habe nicht daran gedacht
I didn’t think about that

The adverbs "hier-" + preposition have practically the same meaning as adverbs da + "preposition" though they are used much less often. Their meaning depends greatly on the context.

The most important interrogative adverbs are:

Comparative and superlative with adverbs

Some adverbs can make comparatives and superlatives like adjective. This is the case with "bald", "gern", "oft", and "wohl".

Sie isst schnell [schnell as an adverb]
She eats fast